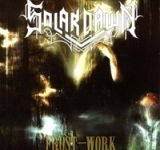 I’m not sure if it makes a lot of sense to spend money on a rather short, only eleven minutes lasting mini CD by a Swedish newcomer act. SOLAR DAWN already put out the featured three songs as a promo CD in early 2000 (back then it was still entitled “Desideratum”), but as it was exclusively meant for record labels, not many of you might have heard it yet. Danish Mighty Music, who signed the band straight away because of this recording, decided to make it available officially, in order to promote the band’s upcoming first full length “Equinoctium” a bit better (which is scheduled for release in August / September 2001). Whether that was a clever move or not is up to you to decide… But anyway, let’s throw in some facts here as well. SOLAR DAWN were formed in 1997 (back then still being called JARAWYNJA) and nowadays their line-up consists of members of UNMOORED, THY PRIMORDIAL and DAWN. They have dedicated themselves to the currently very fashionable modern, groovy type of Scandinavian Death Metal, which means that their very well executed material is certainly very heavy and has a lot of power, but I just can’t get into it anyway. All those bands of the New Wave Of Scandinavian Death Metal (for instance CARNAL FORGE, ARCH ENEMY, THE FORSAKEN, DARKANE etc. etc.) have drifted too far away from the original Death Metal roots in my opinion and either became too melodic or are lacking in the real dark brutality that the forerunners of this genre made so enjoyable. This is a new form of brutal music, maybe appealing to a different crowd, but not necessarily a must for old school Death Metal maniacs.