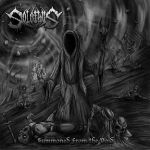 The land of thousands of lakes, drunken dorks and high suicide rates, Finland, seems to produce also lots of quality Doom Metal bands, which isn’t THAT surprising anymore, I guess. The Finnish quintet SOLOTHUS has just been around for about 6 years, and their debut demo, titled "Ritual Of The Horned Skull", succeeded at creating pretty much positive fuss around them, resulting in a record deal with the Spanish Memento Mori. "Summoned From The Void" is the first fruit out of the deal between the band and the label, offering 6 songs of crushingly heavy Doom Metal with a fair twist coming from Death Metal’s side, too. Somehow there’s this peculiar so-called ‘Finnish vibe’ being involved with SOLOTHUS’ epic Death / Doom Metal – I mean, those weeping and depressive guitar melodies ripping through the horizon, leaving not tiniest hole for anyone to escape out of the misery and solitude. SOLOTHUS have also managed to keep their songs positively varied on this 6-track debut album of theirs, combining some plodding elements of Funeral Doom Metal with riffs and stuff that could well have been borrowed straight from some early DEATH or AUTOPSY albums. Maybe that’s why their stuff is described as epic Doom / Death Metal, in which dark and somewhat threatening atmospheres are truly to be touched and felt. It’s such songs as ‘Magus Of Doom’ and ‘Upon Shattered Lands’ that seem to make me charged in sheer excitement most; simply 2 brilliantly written and perfectly executed tunes, having made a perfect match between Death and Doom Metal really. In short, SOLOTHUS’ debut cannot be missed if you are a serious fan of a mesmerizing Doom and Death Metal. Great stuff here. More about these very promising Finnish Doomsters can be found at: www.facebook.com/solothus, label: www.memento-mori.es