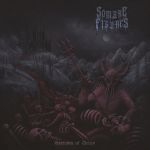 With a name like SOMBRE FIGURES you expect deary, despondent, gloomy, doomy sombre Doom Death, but instead what assaults the ears is raw and raucous Black Metal with a rather tinny and sparse production. The approach and overall sound of these frosty Finns is very minimalistic and chillingly cold, it is a very no frostbitten no frills affair. Caustic screamed vocals howl over the simplistic riffs, the drums plod and pound along changing tempos now and again from all out blasts to mid paced pummeling. They definitely have that 90s War Metal vibe, it is very barbaric and has that washing machine on fast spin perched on top of a mountain sound overall. There is actually abit of icy melody at times which cuts through the cold harsh primitive production and provides some diversity from the all out chaotic bestial barbaric bludgeoning. Nothing new or innovative but such music isn’t about reinventing any musical wheels and is just about all out aggression and barbarity, earlier DARKTHRONE comes to mind at times. Not easy or accessible listening on the ears but some music was meant to stay unaccessible and underground. www.deviant-records.de, https://soldeviantrecords.bandcamp.com