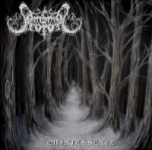 How to spot one of the most influential bands within a specific genre? Well, I guess if more than 15 years after the release of the debut there are still groups taking the music of this band as a blueprint for their own debut. So, leaving any political discussion aside, the early BURZUM releases are still an inspiration for new bands, a recurring aspect in the musical development. SOMBRES FORETS present us their debut, featuring desperate, despondent, dark Black Metal. The atmosphere on "Quintessence" is so intense and concentrated that the audience really is implicated, the atmosphere is taking in the listener in a way just a few bands manage to do, for example the above mentioned BURZUM. The tempo on this first release of SOMBRES FORETS is more slow, a few mid-paced, but no fast blasting parts. Main instruments are the classical Metal-tools, namely guitar, bass and drums, some keyboard and acoustic elements are added, but very sparingly. The songs develop very slowly, and therefore the atmosphere is growing slowly, but constantly. Since I guess only fans of the extreme Metal genre are going to listen to this output, I suppose there is no one wondering about the desperate, sick and screaming vocals, they just fit perfectly, underlining the whole atmosphere. If there is a point to criticize, then it is the lack of any own ideas or inspiration. All on this release has been done before by BURZUM and a few other bands. But there are really just a few other bands which convince the listener by creating such a passionate and extreme atmosphere, and with "Quintessence" SOMBRES FORETS did manage to be a part of this very exclusive circle. www.myspace.com/sombresforets9