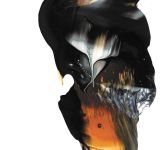 SORDIDE are a new band on the always busy premier French Black Metal (and more) label Les Acteurs De L’Ombre Productions. But the three piece from Rouen, Normandy is already around for quite a while now. Their first Les Acteurs De L’Ombre Productions release “Les Idées Blanches” marks not only my first contact with the SORDIDE way of Black Metal but also is their fourth full length album in seven years. Thus it is no wonder that the album doesn’t sound like a new band making their first real recording. Instead it leaves the impression of a band that already has a certain degree of musical maturity without being trapped in clichés and formulas. The result is an album that sounds French on the one hand (in the most positive meaning) and distinct enough on the other. Atmospheric songwriting and a feeling for fine guitar harmonies are as defining for the sound of SORDIDE as the quite frequent use of repetition right up to monotony as a stylistic device. With all these trademarks, the songs on “Les Idées Blanches” really find their way into the brain and the stomach. Asides from the mid tempo based opener ‘Je N’Ai Nul Pays’, it’s especially the slower, sometimes even Doom Metal based songs that really left a deep impact. ‘Ne Savoir Que Rester’ and the title track are really dark pieces of art. With the final ‘Vers Jamais’, SORDIDE created a song with the qualities of a Black Metal monolith, that takes the idea of repetition to the maximum. And with this one ends an album that will surely be on heavier rotation again in the next months. “Les Idées Blanches” is one of the highlights of 2021 by now, so there is no reason for aficionados of the black or the dark not to check SORDIDE out. More information you will find at: www.facebook.com/sordideband, www.facebook.com/ladloproductions