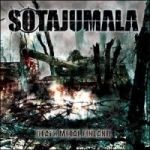 And the Finnish Death Metal invasion continues… “Death Metal Finland” as the title of SOTAJUMALA’s debut full-length hammer, obviously doesn’t need any introduction of these death troopers’ musical approach on the album… or does it, ha! While I have been listening to “Death Metal Finland” with my damn curious ears, I guess it’s not even lame to say that such words as “brutal Death Metal” or “crushingly mind-corrosive Death Metal” or “ass-burning Death Metal” and such ‘quality’ words (!) comes to my mind almost indelibly and the longer you let this torture continue (having said this in a positive sense of the word, ‘of curses’!!), the sooner you start believing an arousing potentiality of them, not taking them for granted by any means as far as their very American sounding Death Metal is concerned, but kind of accepting what they do on their kind of the late MORBID ANGEL – flavored debut album. Yes, this sounds quite heavily “morbidangelish” stuff on “Death Metal Finland” all the way through, with hints taken from both CANNIBAL CORPSE’s and SUFFOCATION’s direction as well. It’s certain that the guys in SOTAJUMALA have well learned their lessons when it comes to series of furious and merciless blast beats, never-ending stream of blitzkrieg-like riffages, sharp and totally killer leads into Trey Azathoth – vein, guttural Death growls and all those things in general that can be considered as the most essential things in downright heavy, tight and brutal modern Death Metal that also reaches a rather technical level as far as songs structures are concerned. Even if SOTAJUMALA uses their own native language Finnish to get their message through amongst Death Metal communion which is somewhat greatly fascinated by anything related to World War II or war topics generally, I believe the language isn’t any restrictive thing for them. Their well-executed Death Metal will surely be loved and enjoyed over the language borders inside the circle of Death Metal – fans around the world as it’s still the music that matters after all. ‘Syyttömien Veri’ (‘Blood Of The Innocents’), ‘Kuolleeet’ (‘The Dead’) and ‘Pommitus’ (‘Bombardment’) are all very vicious and mean tour de forces of a well-executed Death Metal that don’t offer anything particularly unique or original musically, but certainly put a listener to suck a sack of dust into his / her lungs and vomit blood and guts right on the battlefield of SOTAJUMALA’s crossfire. “Death Metal Finland” takes no prisoners… it grinds you down ’til you are no more. Check out the band’s website at www.sotajumala.com for all further info. Label contact: www.woodcutrecords.com