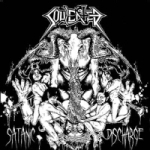 I can tell you I’m in huge love with the Mexican Death and Thrash Metal scene. The last albums of bands as INFINITUM OBSCURE, RAPED GOD 666, THE CHASM or DENIAL were fuckin’ killer and I’m sure I forgot one or another record in this list here. The 7" EP from OMINOUS CRUCIFIX is an outstanding killer, too, and brought them the deal with German F.D.A. Records. A new discovery from Mexico are the youngsters in SOUL EATER and their killer "Satanic Discharge" album. Already with the first listen I was blown away by the intensity this foursome (now only three of them are left) offers. It’s Death-Thrashing brutality mixed with the straightness and Punkish brutality of EXPLOITED’s "Beat The Bastards" (just listen to ‘Aim And Kill’). Strange comparison, I know, but I think it fits perfect to them as this is not the ordinary SLAYER-rip off or something comparable. Emerging from almost nowhere this band convinces with solid musicianship and a great songwriting which makes them even original at times, which is quite rare these days, especially not for a first album. Even the sound is killer, each instrument is listenable and kicks ass. I’m highly impressed here with "Satanic Discharge" as it is full of original ideas and talented playing. The vocalist is great, too, though I have the impression that he hasn’t reached his borders if I consider the awesome "Power Metal" – scream at the end of ‘Thrash Metal Dogs’. What’s left to say? Simply try to get this album as it is worth your money and an album you will keep listening to for a while – my promise! The only negative thing is that this band seems to have a rather bad distribution for "Satanic Discharge". You can order a copy for US $14 (Europe & South America), US $13 (USA) and US $15 (rest of the world) from reborn25@hotmail.com. All prices include registered airmail. More info on the band can be found at www.myspace.com/souleaterband.