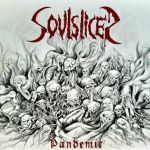 It’s only fitting that Bretagne, France’s SOULSLICER named their first album “Pandemic”. And considering Death Metal can easily include death-by-virus themes, well, there you go. Samual Girard (vocals), Kiato Luu (lead guitar), Jerome Mahe (guitar / bass) and Antoine Poisson (drums), for only being together since 2020, have put together a solid, accomplished group of tracks that capture the feel of Death Metal in its full-on glory. The album won’t push too many boundaries. But it definitely encapsulates why we listen to the genre to start with. ‘Forsaken Sanctuary’ starts it all off with a song sure to break out the mosh pit at any show. It’s rapid at first, slows down, belches out the speed again, then jumps into a steady beat while ever changing and ever causing furious head banging. ‘Soulslicer (Your Time, Your War)’ almost has that late 80s feel to it with a little ENTRAILS thrown in for good measure. The third track ‘Fake Resurrection’ flitters and zooms its way throughout with some machine-gun guitars and drumming. ‘Flesh Eternal’ takes a moment to get going, but damn, when it does, it fills you with gargling vocals and an ominous riff to puncture any open wound deeper. ‘Irradiate Your Soul’ and ‘Armies’ are the kind of tracks that raise you to your feet and get you moving, knocking over anything and anyone in your path. ‘Radioactive Grave’ is a doomy / death amalgamation leading into the final track ‘Angels Of Atomic Light’, an almost anthemic vibe. “Pandemic” is a hell of an album. The band sounds confident in their delivery as if this were their tenth album, but with the energy of a new band with the hunger for brutality and a nod to the glory days of Death Metal. For more SOULSLICER info, check out www.facebook.com/profile.php?id=100083148169821, www.facebook.com/greatdanerecords