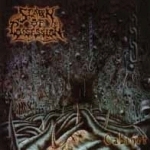 Most technical Death Metal bands that recently came up with new efforts (e.g. HATE ETERNAL, INTERNECINE…) had one major problem: the complex musical arrangements simply destroyed the songs! Especially “King Of All Kings” was definitely a disappointment, at least to me. The album was totally brutal, but there were no songs – everything went down in an chaotic onslaught of technical excess. Now Swedish SPAWN OF POSSESSION unleash their first official full-length CD strike and well, it is a lethal one!!! Although the guitar work is of almost maximum technicality, one does not get the impression, that it is too much or even worse, that the songs get unmemorable and all recognizable elements are lost. It is a bit like on masterpieces like DEATH’s “Human” or ATHEIST’s “Piece Of Time”. There are technical riffs, complex yet melodic leads en masse, but there is still the traditional verse-chorus-verse principle plus one or two breaks in the song’s middle. SPAWN OF POSSESSION’s material continues this tradition, except an often increased varied tempo and deeper vocals in the classic US Death-style like CANNIBAL CORPSE, MONSTROSITY. It is great that the Swedish four-piece does not follow this frog-noise trend shit, like many of the other so called “brutal” bands do. Songs like the opener ‘Swarm Of The Formless’, the fast bandhymn ‘Spawn Of Possession’ (with a cool & evil intro sample) or their demo track ‘Dirty Priest’ are fantastic technical US-inspired Death Metal, that is dominated by an astounding guitar work that skilfully mixes brutality, melody and technical finesse (two thumbs up, Jonas-Duo!!!). The production came out delicious as well, transparent, powerful and heavy. A compliment also to the cover artist – it reminds me a lot of classic Dan Seagrave! “Cabinet” is a great start into the Death Metal year 2003 and you should be damned, if you miss this excellent release. Band: www.spawnofpossession.com Label: www.uniqueleader-europe.com