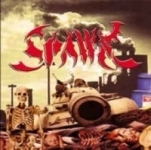 And yet another no-mercy death metal act from Berlin that worships the “untrendy” US-brutality! I still recall the band’s early demo material and I must admit that these 5 guys made a huge step forward musically and in terms of songwriting for this 10-track debut (s)platter. Sure, you can always figure out that Spawn truly dig acts like Cannibal Corpse or Dying Fetus, but I wouldn’t know what’s wrong with that!? Their compositions are all the way catchy, straight forward with nice guttural vocals and a very punchy modern production, so that all in all this should be one of the hottest national newcomers to keep in mind if this is your favourite style of music. Spawn have just finished a quite successful first German mini-tour together with Krisiun and Damnation where they proved that they actually also manage to deliver the guts, eh, goods in a stage performance as well, so… if it wasn’t for the pretty uncool cover artwork (well, then again that’s only my personal taste and opinion!), this would be a complete killer-release. A young band determined to blast its way up in the underground! Label contact: Bruchstein Records, Kadiner Str. 15, D – 10243 Berlin, Germany. www.bruchstein-records.de Band-Website at: www.spawn666.de