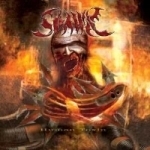 The new SPAWN album sounds more professional than “Systems Full Of Victims”. Absolutely solid but also kind of unspectacular. The beginning of the opener ‘Fear The Just Revenge’ reminds me quite a lot of mighty BOLT THROWER, the rest of the album bows to CANNIBAL CORPSE a lot. Didn’t they even cover CORPSE live on stage? I’m not quite sure and on the other hand: who doesn’t? In a way, ‘Human Toxin’ also sounds pretty German I think. Old school with quite some Thrash influences and a deeep vocalist – not froggy at all, though. The biggest difference to CORPSE is that in my view SPAWN don’t exactly write “smash” hits. Nice record for addicts of traditional Death but certainly not a must have. They’re more fun live I have to say. www.spawn666.de