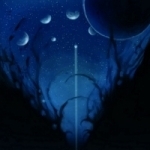 After "II" from 2007, "Sentinel" is again another impressive work by SPECTRAL LORE. For those unfamiliar, this is a one man project from Greece founded by Ayloss who has already released two albums and a split single with UNDERJORDISKA on CD-R. Namely, "I" from 2006 and "II" from 2007. The style is self described as Epic Transcendental Black Metal, taking the listener on a journey that feels on one hand stellar and on the other hand personal like an inner struggle. The lyrics have a spiritual fundament, but also deal about Hinduism. The trip takes off pretty violently, like ‘The Dejection Of Arjuna’ with only remark that in the guitar-section, it becomes pretty chaotic at times. Some arrangements, like on ‘The Coming Of Age’ seem to be focused on creating (or exploring) a certain higher dimension, for my taste. This results in a sort of Heavy / Viking Metal like riffmania. Same happened in the ten minute long ‘My Ascension Into The Celestial Spheres’ but the moody ambient-like ending in the last 2 minutes made up for it. Not to mention the 30 minutes long finishing track ‘Atlus (A World Within A World)’, which is a trip on its own. Eruptions like this make this album hard to call Black Metal, but this album is intended to be more of a spiritual expedition. If that’s not a problem, you might be pleasantly surprised as the result is remarkable. Especially the ambient parts are of high quality. The more agressive parts reminded of a mix from late EMPEROR and DEATHSPELL OMEGA with a sharp and clear production. Decide for yourself and check Stellar Auditorium Productions at www.stellar-auditorium.com. This CD is limited to 500 copies, but digital / mp3 formats can be purchased at http://spectrallore.bandcamp.com.