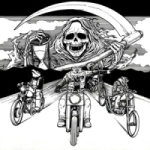 The legend of an American werewolf… they say when these creatures gather they are set on fire… lust for VENOM… lust for human blood… these are no normal pack of wolves… no, they have been altered through time by drinking toxic beer contaminated by a local nuclear plant in an abandoned brewery… thus making them mutants… add to the mix the magic of the night and the fact they were lurking near a motorcycle warehouse… then by the powers of the moon they became one with the old choppers… thus every one of them as a SPEEDWOLF is reborn…yes with the mark of a MOTÖRHEAD in their soul… their barks are that which invoke a raspy Lemmy-like species… this pack of hungry beasts are now terrorizing women and children, decapitating weak bikers and drinking the beer supply of small towns in some place in the vast America… beware! Thrash, speed, burn all on your path! Ye wolves of this caliber are more like rabid dogs… no wonder they are in an intense “Ride With Death”… reports are confuse yet it seems it all started in Denver… those who have survived as they ravaged though, can only detail one thing… they all were wearing ragged Broncos Jerseys… tales say that they arrived to some of the slutiest bars in the area, kicked, bite or even eaten the local band and grabbed their instruments to play what another survivor described as ‘Hell And Back’ fast paced rock and roll… even in that time of fearing for his life, that survivor, remembers the catchy riffs and chorus from that carnage-scene left by the werewolves… thus for the time to come the legend will live on. Pass this to the younger ones and advice them of the lurking fear… that is if you have not been bitten and infected, you will be ’Up All Night’ For sure… as their ride is never ending… we, the followers of the night-moon are more tan pleased… all rise their beer to the SPEEDWOLF! www.myspace.com/speedwolfmetal, www.hellsheadbangers.com