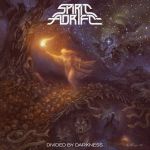 SPIRIT ADRIFT is a band that is constantly evolving. Founded in 2015 by Nathan Garrett in Phoenix, Arizona as a Doom Metal band, they now have fully blossomed into a Heavy Metal band machine. Both 2016’s “Chained To Oblivion” and 2017’s “Curse Of Conception” being fundamentally different from each other in terms of both mood and style set the foundation and character of the band. “Divided By Darkness”, their third full length album, was released on May 10th in co-operation with 20 Buck Spin Records. Coming less than two years after 2017’s widely acclaimed “Curse Of Conception”, SPIRIT ADRIFT’s latest is a powerful, fresh take on classic Heavy Metal replete with killer twin guitar harmonies and anthemic eighties style choruses. SPIRIT ADRIFT play an amazing amalgam of classic Metal genres and produce something entirely energetic and fresh in the process. Classic, traditional, old school, whatever you want to call it, this is a true work of artistry with imagination. It doesn’t take much time to figure out that this album title, “Divided By Darkness” is a comment on the massive ideological rifts in America today. Phoenix Metal squad’s mastermind Nate Garrett stated in one interview that – “it also has another, more personal meaning — the culmination of four years of sobriety. If you pay attention to social media, the world is probably as bleak as it’s been in my lifetime, even though most of that perspective is bullshit. It’s ironic because as a person, I feel stronger and more confident and happier in some ways than I’ve ever been. So I think the new album is reflective of that dichotomy. We’re divided. Everyone’s screaming at each other. I think we forget that human beings have more similarities than differences.” In terms of tonality and production of the previous records, in “Divided By Darkness”, SPIRIT ADRIFT sounded strongest. There are surprises abound throughout the album, not necessarily in style but in execution. There’s a great diversity of styles at play here, as ‘We Will Not Die’ opens with synthesizers building up the atmosphere, but once the drums kick in, it’s a ride into the 80s, then the meaty Thrash of ‘Hear Her’ to the traditional doomy waltz of ‘Tortured By Time’. On ‘Living Light’, with contribution of Kayla Dixon (WITCH MOUNTAIN) on chorus, it’s a thrill to hear the band pull back and forth between stunning, soaring melodic passages and rhythmically complex Thrash, with the second half delivering hefty riffs before Garrett delivers yet another beautiful TROUBLE inspired vocal harmony to close out the song. While ‘Born Into Fire’ presents a Classic Rock sensibility under the guise of Metal. But no song here is quite spine chilling and jaw-dropping as ‘Angel & Abyss’, a six-minute standout that’s one half gloomy Doom Metal dirge and one-half Ozzy style Heavy Metal thrust. It’s got that huge THIN LIZZY twin-guitar harmony section towards the end, which not only makes it one of the finest Metal songs of the year but it also might be one of the best songs in any genre this year, as a matter of fact. At the end, the instrumental closer ‘The Way Of The Return’ marks the depth of this record and make a reminder that Garrett is a younger oracle to carry on the torch of Heavy Metal. Speaking of the front cover painting, a glimmer of light and hope resurfaces from the desperation of eternal darkness; masterfully represented by legendry Joe Petagno. Though SPIRIT ADRIFT has often been compared to PALLBEARER or KHEMMIS, but “Divided By Darkness” subtly crossed SUMMERLANDS and ETERNAL CHAMPION. There is a clear progression in the musicianship on display that is best exemplified by the title track ‘Divided By Darkness’. Between Garret and Sanford Parker steering recording, engineering, and mixing (DARKTHRONE, EYEHATEGOD, TOMBS), the band weaves through fast-paced guitar solos, slow melodic segments, and rhythmic instrumental parts with equal ease. “Divided By Darkness” is a milestone in the career of SPIRIT ADRIFT and certainly one of the most thrilling and anthemic records of this year. It showcases the band stepping out from the shade and marking their ground in the modern Heavy Metal community. Groups such as SPIRIT ADRIFT are the future of classic Metal from American origin – with cliché free multiple and diverse influences, harsh and warm yet at the same time clearly traditional, without ever stopping somewhere in the past. SPIRIT ADRIFT is going to grow big with “Divided By Darkness”. Explore the band at www.facebook.com/spiritadrift and visit their label page: www.20buckspin.com.