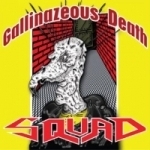 SQUAD’s debut album from 1989, "Gallinazeous Death", is now re-released by retro specialists Area Death Productions. Included are 6 bonus tracks recorded live in their home country of Chile, also in 1989. Now, the live songs possibly come from a tape bootleg, since the sound is raw and the right channel is really muffled. Anyway, considering this is an old recording and that it’s a piece of history, the sound is pretty decent. Now, let’s get onto the studio album. This is your typical Crossover (a mix of Thrash Metal, Hardcore and Punk); a style was really popular back in the late 80s, right when this album was released. And if the info I found is correct, SQUAD was the first band playing this style of music in their country. There are also some IMPULSE MANSLAUGHTER influences here and there, but the music never gets as fast as the aforementioned band. And yes, SQUAD also mixes in a good dose of humor. I mean, just look at the album title. "Gallina" in English is chicken, so I’ll leave it up to you to figure it out. Sometimes, the drumming is a little sloppy and the songs lack orientation, so after a couple listens I lost my interest. Production wise, the sound is raw, treble-y and not that heavy. Luckily for the band, the bass guitar holds everything together. The mix is clear and fits the band. This album could be a great addition for fans of obscure Thrashcore / Punk. Info here: www.facebook.com/inbox/?ref=mb#/pages/SQUAD/10188324794?ref=ts, www.myspace.com/squadband, http://adp.areadeath.net