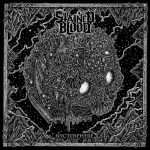 Spain’s STAINED BLOOD have been around since 2005, but only started releasing full-lengths as of 2013. The third album "Nyctosphere" indicates a band well-honed in their skills, and confident in their delivery. Although usually labelled as Death Metal or Deathcore (not that labels really matter), there’s a twist of Black Metal interlaying between the riveting brutality. Narcis Boter (vocals), David Rodriguez (guitars), Miguel Pedragosa (guitars), Raul Rios (bass) and Salvador d’Horta (drums) are a force to be reckoned with, mixing aggressive aural attacks with plenty of atmosphere to give the album a heady amount of destructive mass. ‘Avfall’ opens "Nyctosphere" with ominous chants and murky waves of sound until around 2 minutes when the band unleashes a blast of furious guitars and esophagus-tearing vocals. The texture of the track is a glorious mixture of peaks and gutters, rising and dipping as the need arises. ‘Century To Suffer’ is even more demolishing if that’s possible. It feels like an icepick is being shoved into my eardrums, twisting and grinding until it worms its way into my brain. But this is a good thing musically. The third track ‘The Lightless Walk’ takes over a minute and a half to get started, but damn when it does, it rips an opening in your soul. As aggressive as each song is, the band find a way to allow each track to breathe in its own uniqueness without sounding the same over and over. ‘Shrines Of Loss’ is a steady stream of Metal madness, while managing to shift gears without a moment’s hesitation. ‘Winterflesh’ begins with a warbled piano keystroke until, you guessed it, STAINED BLOOD kick in the door and smash skulls. In case you haven’t figured it out yet, the band never, ever lets up in their intensity. ‘Drowned’ ends the album consistently without disappointing us. STAINED BLOOD prove they’re a band that can easily hold their own. In a world of copycat bands, these guys are on a pedestal all by themselves, waving the Metal flag confidently. For more info, check out www.facebook.com/stainedblood, http://stainedblood.bandcamp.com