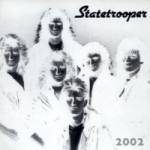 Even though I always used to be quite a big fan of the early MSG albums, I never really got my hands on the one and only album by STATETROOPER, the band which original MSG singer Gary Barden put together after he had parted ways with Michael Schenker… When this album originally came out back in 1986 I already found myself deeply involved in the Speed & Thrash Metal underground (which actually completely changed my life for many many years to come), so I missed out on it. But when you grow older, you often tend to look back on stuff you enjoyed in your teenage days. Same here – I basically "re-discovered" all the albums that I used to fall in love with in the early 80s and noticed that I still totally worship Gary’s voice, even like twenty years later! So, I spent lots of money to get a bunch of my old favorites back on CD after all, and in Gary’s case, also went for other projects he’s been involved in (or still is), like PRAYING MANTIS or SILVER. Needless to say that this time around I also got curious in the STATETROOPER record pretty quickly. Thanx to former guitarist Jeff Summers I got a copy of the recently issued CD re-release and immediately fell in love with the band’s material. From today’s point of view STATETROOPER musically is basically the logical follow up to what Gary used to deliver with MSG, in particular on the "Built To Destroy" album. Which means, the band also delivered a very well composed and arranged form of traditional Heavy Rock, with a great sense for harmonies and tons of excellent melodies. I mentioned the "Built To Destroy" album for the simple fact that it was probably the most "commercial" sounding MSG release with Gary singing, and STATETROOPER also went for that direction as well. Back then stupid me would probably have hated them for the massive use of keyboards, but due to the fact that I also started to admire a whole bunch of AOR releases over the last couple of years, I don’t have any problems with this anymore at all. I actually think that the one and only STATETROOPER record is almost perfect, as long as you like music which is somehow on the edge between traditional Hardrock and AOR. Besides the two additional live tracks (‘Too Late’ and the MSG classic ‘Armed And Ready’), which already used to be part on the original version of the album, the re-release also features a previously unreleased demo track (‘Juliet’) and comes with a slightly changed (negative version of the) cover picture, which I don’t really like. But its musical quality definitely stood the test of time! So, everyone who’s still worshipping all the early Hard’n’Heavy stuff (before this music got separated into countless sub genres) should definitely make sure to add this little overlooked gem to his / her collection after all! All further info you may find here: www.statetrooper.co.uk.