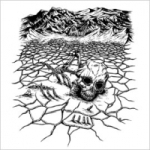 First off, this is a truly great compilation release. A great release in the sense that these 2 demos + one EP have been available in limited formats earlier – and obviously are sold out, or at least nearly sold out by now. We are talking about Finland’s ‘new’ old school Deathsters STENCH OF DECAY’s selt-titled CD-release here, which features everything the band has recorded in the studio thus far; starting from the band’s self-titled 4-track 2005 demo up to the band’s 2-track EP, titled "Visions Beyond Death" that both Detest Records and Me Saco Un Ojo Records released in co-operation in 2011. Also, featured is STENCH OF DECAY’s 2nd 4-track 2009 demo "Where Death And Decay Reign", which also contains a cover of ABHORRENCE’s ‘Vulgar Necrolatry’ song, sung by the original vocalist of ABHORRENCE, Jukka Kolehmainen. Pretty darn cool or what? A compilation CD like this, is definitely very justified – especially for those people who never got a chance to grab a copy from STENCH OF DECAY’s all 3 releases before. Now they have at least a good chance to get each of them in one package. Those, who already have all their stuff they have ever recorded, will undoubtedly purchase this also because this is the very first time when one gets a chance to own STENCH OF DECAY’s releases on a decent quality CD. There’s little I could write about this comp-CD of theirs because let me tell you that STENCH OF DECAY is quite simply the best and most convincing Finnish Death Metal band out there nowadays that has risen out of its dark bunker during this 2nd wave of Finnish Death Metal boom. It’s just as simple as that really. I could write some superlatives one after another about this must-get release, but I think it would be much better if I saved you from all the prolonged reading, and just suggest you warmly to get this. Fans of early DEMIGOD, DISMEMBER, ABHORRENCE (naturally), early AMORPHIS, NIHILIST / early ENTOMBED, early BOLT THROWER and such, there’s no way you could miss this release either. A B-I-G fukken hail to Ektro Records for putting this gem out! This is what I call a customer-friendly release policy… Let your nostrils lead you towards STENCH OF DECAY at: www.myspace.com/stenchofdecay, www.ektrorecords.com