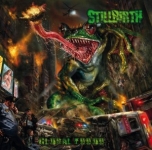 German Grind / Death outfit STILLBIRTH present their fourth output via Rising Nemesis Records. Active since 1999, these slashers from North Rhine-Westphalia have dedicated themselves to the brutal and ugly side of Death Metal, called Grindcore. The eleven tracks plus intro of their new opus "Global Error" present the band in a pretty good shape. In thirty-nine skull-crushing minutes, the band shows all parts of their fine skills. Technical Death Metal / Grindcore at its best, with deep grunts, often changing into shouts and screams. Fast and precise drumming with the genre typical blast beats and fast pounding double-bass attacks, driving the bands sound through the eleven tracks. The guitars are hard and rough but also very melodic in some songs. Especially ‘Media Zombies’ is a real killer track with a fine Heavy Metal melody meeting cool Grind, while the cool bass lines fulfill their sound. The powerful material catches the listener and takes you on a cool and diverting trip. Especially some of the lead guitars remind me of mighty NECROPHAGIST or even older Heavy / Rock stuff and these, combined with some Hardcore influences, really fit perfect into their musical concept. The production is clear and powerful and there are no fillers on the album, as all songs are well wrought. The last two tracks are re-recorded versions taken from their second album "Plakative Aggression". For all Grind fans, this is the real first highlight in this young new year. Check the band out via: www.facebook.com/stillbirthparty and www.risingnemesisrecords.de