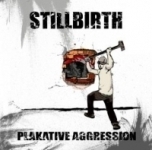 “Plakative Aggression” is the skull crushingly heavy first full length release from STILLBIRTH, a German band which combines all the best elements of old and new school Grindcore and Death Metal with a hint of 80s Thrash thrown in once in a while. From the roar of “are you ready for a riot?!” in the albums opener, ‘Riot Over Buhne’ to the devastating, and not so subtlety named closer ‘Kick The Shit Outta Your Face’ , STILLBIRTH deliver a steady stream of pure aural brutality that is never pretty but always effective. Each of the 15 songs are full of pounding riffs and breakdowns that leave the listener with the urge to smash everything in the room and will no doubt become pit favourites sooner rather than later. ‘Steuerklasse 1 Und Keiner Sagt Danke’ has a riff that could easily have featured on an early DEICIDE record, while the short and sweet ‘You Look Like Your Parents Were Siblings’ and ‘Talkshow Brawl’ almost seem like homages to classic NAPALM DEATH. The band also shows a flare for moving swiftly from face melting blast beats to crushing, instant headbanging breakdowns. However it is when they are blasting that they are at their best, as heard in ‘Individual Related’. The musicianship is of the highest quality throughout the album. Drummer Andree Kress impresses with his rapid fire double kick and blast beats, which are especially impressive in ‘Individual Related’. He and bassist Dominik König do a fine job of keeping the surrounding chaos on track and in order, and Dominik bass also provides the songs with a few touches that grab the listeners attention, particularly his eastern sounding bass line in ‘Kick The Shit Outta Your Face’. Guitarists Lukas Swiaczny and Sebastian Stolaczyk also prove their worth with a fine array of riffs that are sure to go down a treat in pits in the coming years, particularly in ‘Kick The Shit Outta Your Face’. Lukas and Dominik provide the extremely powerful vocals that often reminded me of Matt Heafys vocal work with CAPHARNAUM. The addition of samples and techno beats in ‘Schmand An Der Hand’ and ‘Individual Related’ works really well, adding some originality to the proceedings and helping them stand out from other Grind / Death Metal bands out there. The production of the album is also of the highest quality as each riff as the recording never sounds like mush, a problem which is common on many Grindcore releases, and each instrument can be heard clearly. However, I feel the album would have benefited if two or three songs had been left out as, after a while, some of the breakdown riffs do begin to sound very similar. Overall, this is a great debut release from STILLBIRTH, which combines the best elements of modern and old school Grindcore and Death Metal that is sure to please fans of NAPLAM DEATH, JOB FOR A COWBOY and ALL SHALL PERISH. A highly recommended release. For more on STILLBIRTH check out: www.myspace.com/stillbirthparty or www.stillbirthparty.de