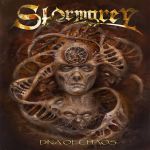 Although STORMGREY was formed in 2011, it features members and ex – members of some well-known Lithuanian bands such as CONSCIOUS ROT, BURYING PLACE, ANOMALY and DISSECTION. So at first hand you know this is a band with a lot of experience in their ranks and that definitely shows. Now, besides those connections, STORMGREY stands on its own, playing a solid mix of Thrash and Death Metal. And their sophomore album “DNA Of Chaos” is exactly that. Production wise, it is dense and at times overwhelmingly heavy. Simply crushing! I think they had a well balanced mix since every instrument has its own place. And surprisingly, the mastering has a lot of dynamics. It stays away from the “compress everything to the max to make it louder” nonsense, which makes it a lot easier for the listener to really dig in and enjoy every single nunce that “DNA OF Chaos” has to offer. Arunas and Raima’s guitars are thick, full of palm muted riffs and eerie harmonies. Liudas’ bass guitar is high enough in the mix and it not just adds to the overall heaviness, but also intertwines perfectly with the guitars and the drums. In this department, drummer Arunas knows exactly when to keep a steady double bass beat and when to highlight the faster parts, keeping things tight yet varied. Andrius’ vocals are deep, but not exactly growls. He uses a mid range, very understandable tone which he alters from time to time to give each song a push where it is needed. STORMGREY mostly dwells in the slow to mid paced realm with occasional bursts of speed cleverly placed between the songs to spice them up and keep them interesting. STORMGREY doesn’t bring anything completely new to the genre but their performances, their style and their conviction surely makes them a force to be reckoned with. This is an album that will surely put them back on the map after 6 years of waiting since their debut, “Pray.Crawl.Suffer”. You can support the band at www.facebook.com/stormgreyofficial, label contact: www.facebook.com/greatdanerecords