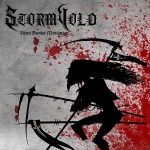 STORMVOLD from Tenerife, Canary Islands is a two-men project born in 2012 and after two demos and a compilation tape, Xtreem Music picked all their material up and released their first two demos with some new stuff as their first real full-length in form of "Third Bestial Mutilation". The presented eight tracks are a dirty mix of old school Death Metal influenced by US bands like early MORBID ANGEL, with some influences of raw Black Metal and Thrash Metal of the late 80s. STORMVOLD have no ambitions in providing any melodies or fine solos, they reduce their sound to the style, which was around in the middle and late 80s, when bands like early SEPULTURA, SARCOFAGO, POSSESSED and SLAYER made their first musical steps and the race was to become the most extreme band on the planet. The vocals are a harsh bastard of Death and Black Metal vocals. The raw guitars are low-tuned with maximum distortion adding some rare and raw guitar solos. The drumming is brutal and they keep the technical level low and the songs simple. The production also is raw and harsh, trying to match the standart of the 80s, but of course it sounds a lot better than really old productions. I prefer the two songs of their first demo, as ‘Extermination From Nature’ and ‘Levitation Of Bestiality’ are really good tracks, with some nice lead guitar lines, but they reduced the incorporated melodies after this release. Those of you, who still prefer the times, when Death, Black and Thrash Metal was one dirty mixture and nobody cared for categories, you should give these guys a listen. More info can be found via: www.facebook.com/stormvold666, www.xtreemmusic.com