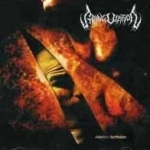 After the two demo CDs “Carnage In Heaven” and “Withering Existence”, which were already good releases, here we have the great debut album of this Swedish Death Metal warriors. “Atrocious Retribution” is an excellent piece of ass kicking Death Metal. Obviously those Swedish Death mongers have nothing new to offer. No innovations, no originality, no musical revolutions… just nothing new at all. Unless I’m very much mistaken, it’s not their intention to invent a new genre or something like that. But hey, it’s nothing wrong with that kinda attitude… on the contrary. To be honest it’s a damned cool attitude… as long as a band is able to create songs with personality instead of being just a poor copycat and believe me STRANGULATION definitely has the ability to create some fucking great neckbreakers. STRANGULATION’s way of Death Metal is well executed and it is a rather furious and thunderous blend of fast blasting and groovy mid paced stuff. I would describe it as CANNIBAL CORPSE influenced US style Death Metal with some very few hints of their Swedish roots. You can hear the musicians dedication to Death Metal with every single note they play… As mentioned before you shouldn’t expect innovative song structures nor virtuosity here but highly energetic in your face Death Metal with a proper production. Yeah, the sound is pretty cool. It’s quite raw and powerful but not too polished and one can hear what the bassist has to say… By the way, the vocals on the STRANGULATION debut demo “Carnage In Heaven” were done by Dennis from SPAWN OF POSSESSION who really did a great job, but Jonathan, the new vocalist (who already did the second demo) comes very close to what I call a perfect Death Metal voice. He sounds rather dark and brutal but still naturally and predictable. My fave song on this album is ‘The Strangulation’ which is a brutal hymn with an obscure and dark atmosphere. So, enough said, if you really appreciate a mind blasting, brutal, non compromising Death Metal assault you better should get your fingers on this album… as soon as possible!!! Highly recommended!!!