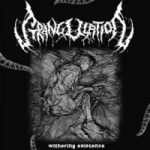 Although the Swedish brutal Deathers first demo assault "Carnage In Heaven" was not a perfect example for originality, it convinced by concise and straight forward songwriting and the first class Chris Barnes-imitator Dennis Röndum of VISCERAL BLEEDING. Now they have a new man on the mike named Jonathan O.G. (does that stand for "original gangster"?), who does an excellent job and also reminds a lot of the former CANNIBAL CORPSE singer. Musically STRANGULATION are also heavily inspired by the US Death Metal band No.1, but add the typical Swedish down tuned guitar sound, which creates an immense heaviness the American paragon unfortunately has lost in the last couple of years. The four songs reanimate the spirit of the late Chris Barnes-era stuff, especially due to the natural sounding vocals, the skilful, diversified guitar play, the gut-pounding drums and the structural mix of groove and blasting aggression. In terms of production STRANGULATION took a big step forward compared to the 2002 debut demo. "Withering Existence" sounds extremely professional and has this deep, heavy and round vibrancy that is absolutely essential for traditional brutal Death. To sum it up, whoever enjoys an excellent rhythmical, catchy full frontal slab of brutalizing Death Metal and prefers natural growls to "oink oink"-gurgling should feel obliged to send 5 Euro / $ or 30 SEK to Juha Helttunen, Faktorivägen 12 A, 691 33 Karlskoga, Sweden. MP3’s and additional information can be found here: http://listen.to/strangulation, Email is strangulation@hotmail.com.