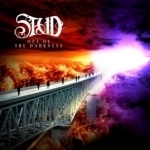 STUD
Out Of The Darkness
(self-financed)
50:16min

STUD is a short-lived Finnish Heavy Rock / Metal act that was founded in 1986, using their native language Finnish to get their Heavy Metal message out – and to be heard back in those days. During their career, spanning just about 3 years (1986 – 89), they did achieve a lot back in those days but in the same breath, they still didn’t achieve much at all really, I guess. Release wise, just a 2-song 7" was released in 1986, although STUD would have had a fair good chance to land a proper record contract back then, too. However, at the end of the 80s, because some harder forms of Metal music (especially Thrash and Death Metal) became so popular in Finland – and elsewhere too, label owners basically showed the door for STUD. In 1989 it was all over for them before things had even started happening for them. STUD was over. Then in the fall of 2011, the guys of STUD decided to meet together again, talking seriously about resurrecting STUD. The band went to the studio in no time to record their new 2-track single (containing of such songs as ‘Lovers In The Night’ and ‘Out Of The Darkness’, just to give some extra promotion for their forthcoming full-length studio album. Well, the album’s finally out, titled "Out Of The Darkness" – and for what this is, it truly serves the band’s mission well about being aggressive, skilled and louder than your wife when being burst into full rage. STUD sound shamelessly retro-ish on "Out Of The Darkness", just like they should do in the first place. Their sound is heavy, masculine and ‘big’ the way bands how such names as Y&T or BLACKFOOT or DIO made it to sound on some of their earlier ‘hit records ("Mean Steak", "Siogo", anyone?).’ Then again, STUD sound like none of those bands but themselves only. It can be heard from everything actually the band’s past musical experience, the yesteryear of lived life and stuff, shine through STUD’s pompously hard rocking Metal. The band’s strength and true potential lie in the songwriting, which produces a number of beautifully flowing, catchy Heavy Metal / Rock anthems like ‘Run To The Shelter’ or ‘Secrets Of Love’. STUD possess some outstanding musicianship, as "Out Of The Darkness" so convincingly proves it. However, one question can be asked inevitably: are STUD too late from their train? Do younger people still welcome this type of music to their homes? Well, obviously time will tell, although STUD would deserve to get some of our love. More information about these stud-ish Finnish gentlemen can be sucked at: www.facebook.com/studofficial, worldwide promotion: www.metalrevelation.com