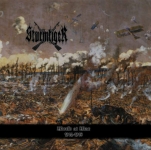 No, this is not any crap of NS. STURMTIGER is the name of a military machine used in the first World War. And by reading the title of the album, you can guess what the lyrical concept of this Danish trio is. Calling them War Metal is correct, as obviously the topic of war is present in every possible aspect. Also because bands that are referred to this style such as CONQUEROR, DIOCLETIAN and BOLT THROWER (although there’s differences between them), share a riffing style that needs to sound like a tank rolling over skulls, and this is also in here. At very few times, the band enters a total chaos mode, but then come from it with a good melodic, yet still very heavy part. Basically we have a very good Death Metal band with whispering like low end vocals, and which takes some of the best elements from good Death / Grind in the TERRORIZER vein, some brutal Black Metal touches, and mostly Death Metal, which is not far away from a mixture of DEICIDE, MORBID ANGEL and DESTROYER 666 to name some references. At the end of the day, the album has nothing new or unheard before, but it is well done, has a great bassy sound, and whilst many are obsessed with WWII in this case the band goes with WWI for once. Death metal fanatics of bands like ASPHYX, BOLT THROWER and GOD DETHRONED cannot go wrong with this one. For more information check out: www.facebook.com/sturmtigerwarmetal, www.blackplaguerecords.com