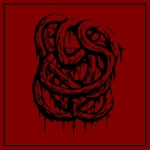 Bands like SUBDUER puzzle me, because they stand on the brink between cacophonic garbage and experimental innovation. SUBDUER’s aim is to put chaos and noise into raw extreme Metal music. Their flyer says it all: Lo-Fi War Noise from Germany. Got the point! Yes, they’re a German band. Yes, the sound quality is very very poor and their musicianship too. Yes, they play noisy stuff and they try to sound like a sort of cyber Bestial War Metal band. SUBDUER was founded in 2017 by Shemhamforash (drums) and Az-Zabaniyya (guitars). They already have two titles in their discography, both released in 2018: a split tape with their countrymen CORPO and this EP called "Death Monolith" under the German label Dunkelheit Produktionen. SUBDUER’s style is basically a mixture of very distorted and chaotic electronic Harsh Noise and raw Black / Death Metal. "Death Monolith" is a short 4 songs EP for almost 18 minutes. The Harsh Noise / War Metal mix is not a bad idea at all, but what lacks here is musicianship. It sounds like they’ve started playing their instruments a few months ago. I can’t judge the electronic parts, because I’m not familiar with this style, but for sure they are able to create an apocalyptic wall of noise. Regarding to the Metal parts, we have some big problems here. A raw production, tremolo picking riffs and a chaotic drumming are not enough to sound like CONQUEROR, REVENGE or GOATPENIS. The guitars are just ultra distorted chaos and the drumming has a very DIY approach. The cymbals are ultra trashy, the snare sounds too distant and the bass drum is nonexistent. The drummer plays two different types of blastbeats (the traditional European one and the hammer one), but the performance is pretty bad and not particularly fast. The vocals are good: an alternation of growlings and screamings, both effected and very disturbing. SUBDUER, without any doubt, are strongly influenced by bands like TETRAGRAMMACIDE and NYOGTHAEBLISZ, both musically and visually. So, if you’re into this kind of Black / Noise acts, give a chance to these German guys. They most likely don’t give a shit about improving their musical technique, but I think that a full control of the instruments is mandatory, even if you want to play or improvise noisy stuff. www.facebook.com/illesinedeum, www.dunkelheit-produktionen.de