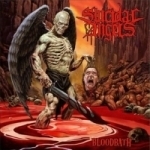 Mille of KREATOR’s favorite Greek disciples of Thrash Metal, SUICIDAL ANGELS have returned back to the limelight with their 4th studio album, "Bloodbath", which pretty much continues this Greek bunch’s saga as the most relentless and promising Thrash Metal act from the Greek soil, without any compromises. Ever since Nuclear Blast Records signed SUICIDAL ANGELS (even if just for 1 record), the band has climbed up to the top of a growing popularity’s wave, which has brought them a long way since the band’s hair-messing debut album, "Eternal Domination", was released on a small, independent American label Old School Metal Records in 2007. On "Bloodbath", which is the band’s 2nd record for NoiseArt Records, these four Greek horsemen of Thrash, have sort of expanded their horizon a bit more music-wise by noticing better a balance between a fast and aggressive style of doing Thrash Metal – and more mid-paced yet even more melodic way of playing within the same genre in question. Yes, the familiar, violent and somewhat SLAYER-ish vibe is still strongly displayed through the songs on "Bloodbath". Such storm troopers of vicious, frenzied and balls-out Thrash Metal anthems as the title track ‘Bloodbath’, ‘Moshing Crew’, ‘Face Of God’ and ‘Torment Paypack’, just come mercilessly to a listener’s face, simply leaving no questions whether these Greek can Thrash or not. What comes to those more mid-paced numbers on "Bloodbath", ‘Chaos (The Curse Is Burning Inside)’ is such one, somehow reminding me of Max era SEPULTURA. Killer and catchy song nevertheless – and I would use the same words for ‘Legacy Of Pain" as well, in which Karl Willets of BOLT THROWER as well as Martin Van Drunen of ASPHYX / HAIL OF BULLETS both do guest vocal appearances. For some reason or the other, it’s a song called ‘Skinning The Undead’ that seems to impress me mostly due to the song’s wicked riffs and solos in it. Who mentioned SLAYER’s name along with the aforementioned song title? Me? You? Splendid – you have done your home lessons well, I think. The closing track ‘Bleeding Cries’, is again a well constructed, mid-paced number – sealing the record with a stamp of ‘quality retro Thrash’ somewhat rightfully. I don’t hesitate to say "Bloodbath" is SUICIDAL ANGELS’ so far the most enjoyable yet mature sounding record to date. Be sure to catch them live on the "Full Of Hate" tour across Europe, starting on February 9th in Hamburg, Germany. www.suicidalangels.com, www.noiseart.cc