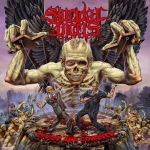 SUICIDAL ANGELS are worried about us humans, as we act inhumanly against each other on this dying planet. Lyrically, these Greeks want to reflect the horrors of our everyday lives on "Divide And Conquer", which is the band’s 5th full-length in a chronological order, too. Much like on SUICIDAL ANGELS’ previous album, "Bloodbath", these Greek Thrashers still know how to thrash like there’s no tomorrow in sight for them. Often SUICIDAL ANGELS have been accused to sound too much like German Thrash legends KREATOR or Californian Thrash kings SLAYER, these 2 aforementioned names undoubtedly haunting behind the band’s sound on some of their earlier releases but not so much – or THAT distinctly during their recent years because SUICIDAL ANGELS have kept working hard to achieve a more unique and original sound for themselves over the past years or so. "Divine And Conquer", while still being loyal for the old school Thrash kick the way SUICIDAL ANGELS have always been for that matter, sort of underlines this fact even more about the guys’ serious attempts to make an album that sounds like SUICIDAL ANGELS – and SUICIDAL ANGELS only. At this, they indeed have succeeded pretty well in my opinion too on "Divide And Conquer", churning out sharply played, heavily riff-orientated, kind of catchy in-yer-fuckin’-face Thrash that is both intense and melodic – and keeps its listeners’ attention relatively convincingly locked into this record for about 50 minutes the albums lasts. "Divide And Conquer" is at least as good as their previous album "Bloodbath" – if not a teeny-weeny better effort from them idea and originality wise, but then again it’s not really breaking new grounds THAT much after all but still managing to offer a healthy dose of 80s reeking Thrash, the SUICIDAL ANGELS way. If that’s something that pleases you enough, then you should know what to do next, right? SUICIDAL ANGELS: www.suicidalangels.com, label: www.noiseart.cc