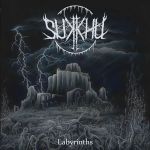 Prague’s birthed the band SUKKHU who create an atmospheric form of classic Black Metal which brings to mind the early to mid 90s classics. Morgause (vocals), EGO BMK (guitars) and Megiddo (drums) capture the feel precisely, mixing old school guitars, screeching female vocals and drums that keep the pace nicely. With their first album “Labyrinths”, there’s a little DARKENED NOCTURN SLAUGHTERCULT vibe going on in the vocals, which is a good thing. Overall, it generates an ominous sound that drags us into the dark to consume our souls. ‘Labyrinth Of Fog’ starts it off with some BURZUM – like guitars that set the stage for some eeriness as Morgause bleeds the words through her lips in a creepy, scratchy voice before the track erupts into an aggressive, intimidating array of hysteria. ‘Gaillard’ is a deep, throaty mass of despair which limps, runs and stumbles its way through the mire. As Morgause screams “Purify By Fire” (the song’s title), she immediately gives you the impression not to fuck with her. There’s an energy and passion in her voice that wastes no time in pissing on its territory. ‘Of Thousand Souls’ is a mid-tempo tribal track that morphs into a gelatinous thing of horror and death. ‘Homecoming’ is a segue into ‘The Murrain’, something you’d almost imagine hearing as your face is about to be ripped off. ‘Invocation’, ‘Dark Side of Light’ and ‘Aurora Ultima’ are all trips into the abyss, with no hope to escape the soul-wrenching journey. Here’s a Black Metal band that sort of comes out of nowhere and delivers the type of album I’m drawn to. The band has embraced the darkness and grasped hold of the pure essence of Black Metal. And damn those female vocals by Morgause…What a thing of tortuous beauty. For more info, check out www.facebook.com/sukkhuofficial, www.facebook.com/nigredorecords