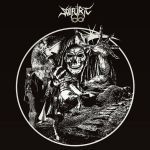 SULFURIC from Sweden might be a new name to your ears, for mine it surely was, but the guys play in a bunch of other bands and know how to handle their instruments. So from the get go they deliver fast, rabid, skin melting Black / Speed / Thrash Metal in the vein of NIFELHEIM, old BATHORY and old DESTRUCTION. I really like the low bottom, analogue sounding production. There are 9 tracks (one being an interlude), the riffs are scorching and well delivered, the drummer is fucking solid and fast, so it invokes furious headbanging and should please the fans of blackened Thrash Metal. I’m not too excited about shrieking Black Metal vocals, but that goes with the style, so who am I to complain? Still some variation with the delivery would add more fire to this molten Metal cauldron. This is their debut album and if the guys won’t get lost among many of their other projects, SULFURIC might be a band to watch. The album was released on Iron Fist Productions from Sweden, operating since 1998, they have put out lots of classic old school Swedish Death and Black Metal over the years, so I guess they are experienced at selecting good stuff. Definitely recommended to give it a few spins, it might just infect you. Band info: www.facebook.com/sulfuric-108544018184062, Label: www.facebook.com/ironfistproductions1