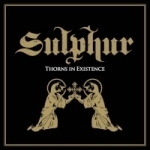 Formed in 2000, this is the second album for this Norwegian Death / Black Metal combo. The first band it resembles is MORBID ANGEL and to also to later EMPEROR. Maybe I could also compare them in the same style as country mates ZYKLON. This is well played, well produced extreme Metal, which has a modern sound. And that is where I find this to lack some power. No matter that they have a heavy sound, the modern touches, with minor industrial influences, at times distract the band from creating good riffs or songs. Also this modern sound with very polished production tends to sound sterile and way too predictable. SUPLHUR suffers from this in almost all songs. On a deeper examination, there are quite some very creative passages and well executed riffs as in songs like ‘Hunting Sickening Seas’, but more than once in a while the band tries hard to add a lot of “color” in their music thus taking away the primordial force which is more likely done with simplicity. Now, this has to be approached also taking in count the band touches more than once atmospheric passages. Also the guitar players showcase more talent that your average Death / Black Metal band. Vocals can also tend to sound a bit monotonous (although more than a few “spoken” or normal “sung” passages are added) and maybe a bit behind the mix. Still, with all the details I have mentioned, it is quite an enjoyable album, which can be even obscure and experimental in a way, that might attract those looking for a far more complex dark extreme sound. www.myspace.com/sulphur666, www.darkessencerecords.no