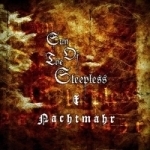 Despite my hopes, this unfortunately is not a new SUN OF THE SLEEPLESS – recording, but old, yet not or no longer available material. However, five out of six songs here were already in my possession and therefore were able to grow. The six songs featured (among them a cover of BURZUM’s ‘Dunkelheit’ and DARKTHRONE’s ‘En As I Dype Skogen’, re-titled to ‘Tausend Kalte Winter’) are all quality-songs that show the obvious influence DARKTHRONE on the one hand and later ULVER on the other hand had on this project of Schwadorf (EMPYRIUM). The CD starts with two furious (as far as I know officially unreleased) Black Metal-songs that could have well been on S.O.T.S.’s debut-mini "Poems To…", which is followed by the BURZUM-cover, probably one of the best covers ever done and I personally never understood why this cover did not make it to the official tribute – album, although the song was displayed for download on the label’s homepage for several months. The following ‘Neunter November’ (released already on a compilation if I am not mistaken) is the first one to incorporate TripHop-influences, that simply grip you and I caught myself not only once strongly urged to start dancing. The following two songs (among them the DARKTHRONE – cover) were taken from the "Tausend Kalte Winter" – 7"EP (released in 1999 as the follow-up to "Poems To …") are further in this line and mix the feeling of Black Metal with TripHop and nearly Ambient-like soundcollage. All songs of S.O.T.S. are doubtlessly unique and have class, but I would have hoped for some new songs and I am not really a fan of making 7"s available again, but this is certainly a matter of opinion. From the very first moments of listening to NACHTMAHR, it is clear that Schwadorf is a member of that band either for at least two reasons: his vocals are distinguishable at once and the overall impression is really like EMPYRIUM having gone towards Black Metal rather than acoustic, I don’t know why I feel so much reminded of his first band. Anyone who liked the earlier EMPYRIUM efforts or the first S.O.T.S.-mini will probably also dig the NACHTMAHR-part, but I am missing the final kick to be honest. This is well-performed etc., but in a way it leaves me unmoved. But I am quite certain that anyone who is interested, will be satisfied with it. At the end I however have to add that I have no understanding for stealing a bandname from a long active Black Metal – band from Southern Germany, who has released several demos and splits until now. Even if they were unaware of that band, a quick look through the net would have made them aware that that name is already used. I am not sure what the final release will look like since I only have the promo, but as Lupus Lounge / Prophecy-releases in general turn out to look really impressive, I recommend this for the SUN OF THE SLEEPLESS – part on this CD, especially if you do not own the 7" and one of the compilations. www.lupuslounge.com