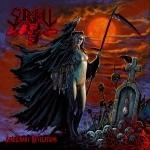 SURGIKILL from the US is a quite new outfit formed in 2015 and after only one promo release, they immediately got signed by F.D.A. Records, who saw the quality of the material. Even though this outfit is new, its members all are musicians, who have been involved in several bands and projects before, so no newcomers are at work musical wise. With “Sanguinary Revelations” the band pukes out 10 tracks of horror and gore in the vein of IMPETIGO, AUTOPSY or INCANTATION upon mankind. The first tunes were a bit difficult for me, because the material sounds quite chaotic and raw and the sound is very rough at the first listen but after some tracks, I got used to it and the quality of the material was revealed to me. The band covers all, what the willing listener expects from a brutal old school US Death Metal band. From high-speed attacks with blast-beats and pounding double-bass down to slowed-down Death Metal, sometimes even with doomed guitars, every aspect gets covered. A special thing in their sound are the four vocalists (one female), who cover all kinds of possible singing styles from grunts, over brutal caws up to high screams and only one of them is involved in playing another instrument. Live this must be an interesting show and this fact makes their music quite special. As mentioned, the sound and the production is very raw and unpolished but fits very well to their music and keeps it raw and simple. IMPETIGO fans also get a special gimmick, as Stevo is one of the vocalists in SURGIKILL and with ‘Planet Of The Vampires’ the band offers an old and unreleased IMPETIGO track from the early 90s, before the mighty cannibals disbanded. Fans of brutal old school gore Death Metal definitely must check this output. More info can be found at the following locations: www.facebook.com/surgikill, http://surgikill.bandcamp.com, www.fda-records.com