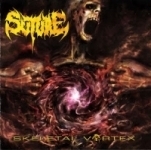 From Louisiana, USA, hails a 3-piece Death Metal torpedo more commonly known as SUTURE. These fellows’ so far latest full-length studio album, a 10-track effort titled "Skeletal Vortex", is the band’s 2nd studio album in order (the band’s debut, "Carnivorous Urge To Kill", came out in 2002 already, and the band split up in 2008 and reunited in 2012), which was first released on US label Unmatched Brutality Records back in 2008 – and now when the band collected their troops back together again, Russian label SFC Records wanted to reissue that particular album in question in 2012, as a remixed and remastered version (due to a mistake at the pressing plant, tracks 3. and 4. are blended into one continuous track). What this is, to me there’s quite a lot of influences from such bands like CANNIBAL CORPSE, PYREXIA, DEICIDE but especially SUFFOCATION in SUTURE’s sound, which I actually find pretty appealing for myself. Good, well-executed American Death Metal always works as a delicious dinner; you know exactly every time what you are about to get. SUTURE’s trio seems to offer a high quality, very tasteful dinner on "Skeletal Vortex" at least. The guys’ demonstration in all things bone-crushingly heavy, slamming, pounding, blasting and especially downright brutal, can be approved by four strong aces by majority in the Death Metal community. Forget melodies – forget all trendy sounding wanna-be Death Metal nerds: SUTURE are among us to offer a real deal. The more one sinks his / her ears into this, the more confident one can also become in order to state it’s actually SUFFOCATION whose little brother (or a long lost cousin, whatever) SUTURE well could be. There are quite a few heavy circumstantial evidences to be found from their sound that easily connect SUTURE to SUFFOCATION – and especially Jayson Ramsay’s vocals do strongly remind of one Frank Mullen’s vocal delivery, which is nothing but great of course. Other than that, when the whole package works for the band’s sheer advantage, I am positive "Skeletal Vortex" gives lots of pleasure for some serious Death Metal consumers. Absolutely worth checking. Band info: www.reverbnation.com/suturedeathmetal, label: www.sfcollector.ru