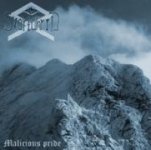 Black Metal – a word unfortunately linked in all kinds of media strictly to the one and only band DIMMU BORGIR. But there had been so many other bands which released fantastic albums during the birth of this style. I think about bands like HADES, OBTAINED ENSLAVEMENT or BEWITCHED. Some of these bands had been long forgotten others are still creating their music nevertheless the decay inside our scene. One of these bands is SVARTAHRID which after two releases for Napalm Records changed to Soulseller Records and this is the latest release under the new banner. Maybe the record company is new but the basic style of the band is still unchanged. “Malicious Pride” is an album of dirty Black Metal with some keys to support the dark atmosphere of their music but you will not find any orchestral parts nor a soundtrack intro – just 3 Metalheads from Norway, 10 songs and some virgin blood on the altar. The album is a real piece of Metal but after listening to the whole album I can’t avoid the feeling that a handful of riffs had been used for too many songs, but nevertheless is this album the perfect weekly dose of true Norwegian steel. www.myspace.com/svartahrid, www.soulsellerrecords.com