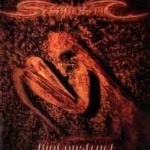 Out of complete nothingness emerges a totally unknown yet fairly promising band called SYMBIONTIC. Founded in the year 2000 they released their first sign of life with this self-financed CD entitled "BioConstruct". I listened to their album more than several times by now and it is still a real pleasure to do so. SYMBIONTIC have devoted themselves to ‘morbid melodic Death Metal’. That means you get quite technical Death Metal with melodies in the vein of the famous Florida style mixed with brutality and aggression (well, what else do you await from a Death Metal album?). Until now it may not sound that spectacular, but I can assure you, these boys come up with a lot more than that. According to their info sheet they are inspired by monuments like MORBID ANGEL, PESTILENCE, DEATH or AT THE GATES. I definitely would add MONSTROSITY to the aforementioned acts. So you possibly get an idea in which musical framework their own compositions reign. Although this is their first release ever the standards of composing and performing are already on a high level. In my modest opinion their music is highly original and way above the average. Despite the technical approach of the songs the music never misses the natural flow, tightness and catchiness. Both guitarists know to enchant with their twisted melodies and soloing, always supported by the tight groove of the rhythm section while the strong and thunderous deep roars of the vocalist add an extra-portion of brutality. Apart from an intro and outro SYMBIONTIC deliver 10 compositions, 4 of them being short instrumental (guitar) interludes that assist in creating the very special feeling and atmosphere of the whole album. So if you feel attracted by my description there’s no need to hesitate ordering this small treasure for 6,50 EUR (Germany), 9 EUR (Europe), 13 EUR (World) (all prices incl. pp) at: SYMBIONTIC, c/o Marcel Schiborr, Wattenscheider Hellweg 205, D-44867 Bochum, Germany; mail: marcel@symbiontic.de. Check out their website at www.symbiontic.de