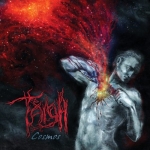 Depressive Black Metal is the name of the game when it comes to TAIGA. This Russian entity stakes it all on sorrowful guitar melodies, more often than not tremolo picked, with some clean guitars and keyboards thrown in and vocals, that are, well, quite specific. Pushed into the background they vail over the riffs, giving the music a certain feeling of detachment. It could be said that for some they might be a bit of a deal breaker, but the same goes for almost anything that is not quite in line with the norm. Even though we are talking about depressive Black Metal here, there is quite a lot of variation in the music of TAIGA – clever use of keyboard, clean guitars and spoken vocals accentuate certain passages, plus the two members do not shy away from tempo changes. Another plus: bass! Cosmos is the fourth album for TAIGA and it shows: it is splendidly composed, the sound feels "spacious" and songs have more than enough character to be easily differentiated. As bleak as this album sounds it certainly delivers. Do not let the "depressive" part fool you: no cheap tricks are used on this one! If interested: www.facebook.com/taigaofficialpage, www.satanath.com/sodp