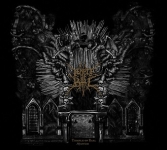 The name TEMPLE OF BAAL was saved under the file Black Metal, but obviously the French band changed during the last releases more and more into the Death Metal direction. A former Black Metal band playing occult Death Metal, well that sounds pretty common. Since the band released their first demo back in 1999 and "Mysterium" is already the fifth full-length release the tight and energetic playing should be no surprise. Regarding the sound everything is fine and the music itself? Mostly the typical blackened Death Metal a band like BEHEMOTH is playing nowadays and I am not quite sure if you can call TEMPLE OF BAAL a copycat. Because some structures are heavily influenced by BEHEMOTH. If someone would have told me the eight songs are some leftovers from the recording sessions for "Zos Kia Cultus" or "Demigod" I simply would have believed that. And that is, all conviction aside, a kind of honor. I guess many bands try to achieve such distinguished way of playing Death Metal (in the means of songwriting) and fail. Personally I enjoyed this album since the latest two BEHEMOTH albums did not really convince me, so once again it is up to each one on his own to decide if "Mysterium" is just a replica and therefore redundant. Or if this album is some well crafted Death Metal with an occult touch everyone liking this style can enjoy. www.facebook.com/pages/temple-of-baal/20135072962, www.agoniarecords.com