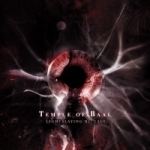 The design of the new TEMPLE OF BAAL release is in some way like a remake of the POTENTIAM debut cover – so not really great or innovative art – but our French friends musically are following a completely different path than the keyboard orientated band from Iceland. If somebody forces me to describe their music with only a handful of words the logical choice would be – Death / Black Metal, Sweden and DARK FUNERAL. But the Black Metal cult act could be easily replaced by another extreme Metal act from Sweden (MARDUK, NECROPHOBIC) especially due to the fact that during the playing time of 40 minutes the minor Death Metal influences are becoming more obvious. But at the end this can’t cover the fact that we are talking about a more or less nice but nevertheless harmless release. The sound on “Lightslaying Rituals” – the third full album after 2 split releases with their French companions ANCESTRAL FOG and AOSOTH – is extreme clear and powerful and give the guitar leads the necessary room but the impression remains that speed is far more important than structure. This is for sure not an album which is lacking of aggression and musical dedication but the similarity of the songs is finally the most important point of criticism. TEMPLE OF BAAL deserves their national status but the current scene in France has definitely better bands to offer. www.agoniarecords.com, www.myspace.com/templeofbaal