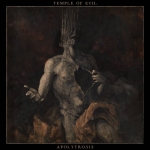 TEMPLE OF EVIL from Cyprus have been around since 2008 and released their first full length album “The 7th Awakening” in 2015. First, they did the release themselves digitally and then Deathhammer Records followed with a CD and LP release and Ill Damnation Productions with a release on cassette. So, the album should have received a little exposure back then, though this new second release from TEMPLE OF EVIL is my first encounter with the band. The new album is released by German Folter Records, a label that has built up a quite strong roster, so I guess that the Cypriots have landed in a quite good place. “Apolytrosis” follows in the vein of the first album. Atmospheric melodic Black Metal with some good hooking melodies, great rhythm patterns and mesmerizing percussion that drives the music ahead, together with the just as mesmerizing guitar melodies. The vocals are well performed and fit great into the intense and pounding, quite organic production. The band uses a little synth here and there, and that works quite well into the concept; it lifts the mysterious ambience a tad. The Black Metal shifts between a good mix of melodic Heavy Metal with direction towards Swedish Black / Death Metal of the nineties and the classic Greek tradition for Black Metal with the dark mysticism, wicked atmosphere and occultism lurking all around – there is a longing for darker periods of time in the olden days present in the music. The album is as such a strong album, even though it has some weak moments, though the stronger parts win. TEMPLE OF EVIL has an ability to make hooking music in their darkness, and that is a big plus and occasionally a reek of old NECROMANTIA shines through as well, I quite like that! Enter the light of my darkness: www.facebook.com/templeofevilband, www.facebook.com/folterrecordsgermany