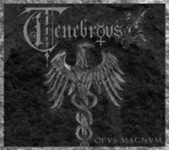 Another USA Black Metal band formed way back in 1998, releasing their debut album 11 years after its conception. One would think that all that time would make them to at least have a different approach to what has been done over and over. But that is not exactly the case here. Yes it is grim, fast Black Metal, with an early BURZUM sound although some other bands comes to mind, like early GRAVELAND (which sounds also like Varg’s band…) and to a lesser extent early DARKTHRONE and EMPEROR. A quite interesting fact is that the drummer (who is also the bass player) is the guitar player for GOREAPHOBIA. In fact is the drumming here that takes away the whole aspect of the album, as it is quite variated for a band that roots on more simplistic Black Metal sounds. Vocal wise, this also suffers from a rather whisper-like screechy screams that actually takes away force from this band. Although at the end it is quite enjoyable, one is left with the impression that this has been heard before, and played with more soul. If the band decides to go for a fuller sound and more powerful vocals, this could rise to better heights (or infernal depths). Done right their style, it would turn more into the sound the very first DARK FUNERAL album, thus making it to be different than the many releases that sounds like “Opus Magnum”. And it would be a wise move to add some evil Death Metal sounds to even enhance it. For some reason, I can sense a lot of potential here. Let’s hope one day the beast will be unleashed. www.lordsoftheblackstone.com, www.myspace.com/tenebrouslegions, www.foreverplaguedrecords.com