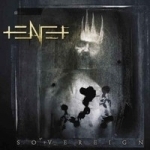 Super groups such as the CAVALERA CONSPIRACY and the TARDY BROTHERS are so poorly conceived, they seem less super groups – where the best musicians gather together to craft great music – and more like black holes where creativity is swallowed whole. But, for the super groups who don’t stick their surnames in their band’s name, less harsh judgment is reserved; for these bands are bands, and not old farts trying to cash in on past glories. TENET, like VOODOOCULT before them, is one of those bands. The band consists of Gene Hoglan (DARK ANGEL, DEATH), Steve Souza (EXODUS), Glen Alvelais (FORBIDDEN), Byron Stroud (FEAR FACTORY) and Jed Simmons (STRAPPING YOUNG LAD). Unlike the Cavaleras and Tardys, Gene Hoglan and company have managed to keep themselves in fighting shape. Instrumentally, this album has the makings of a decent Thrash album. The riffs are good enough that one can ignore the thin drums and Souza’s sometimes horribly off singing (fortunately he smoothes out more often than not). Not surprisingly, given the resumes of more than half the band, TENET is an amalgamation of DARK ANGEL riffs, FORBIDDEN rhythms, and old EXODUS vocals. This is, without question, of the better super group albums in a long while. www.tenetforce.com, www.myspace.com/tenetforce, www.centurymedia.com.