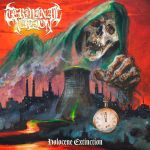 Aggressive downtuned Hardcore married with Death, Doom and destruction! Take WINTER, throw in a good deal of “In Battle There Is No Law” era BOLT THROWER grinding Death Metal together with a punkish and a rancid Hardcore attitude, throw in some “Fuck yous” and tune it all down a bit, then you have TERMINAL NATION. A band out of Arkansas, which here is ready with their first full length album released on the always interesting 20 Buck Spin. TERMINAL NATION is delivering one of this year’s most interesting albums so far. Intense as fuck, dark and crunchy, the guitar tone is amazing, the vocals are sick and fitting, aggressive and intense, merauding and a tad scary once in a while. Even though it all is drenched in darkness and raw distortion, the guitar riffs are hooking and the rhythm patterns headbang-able. The songwriting is amazing and the overall atmosphere crushing and the way the band is playing around with genres, as it was the slightest thing to fit a Death / Doom part as in the track ‘Expired Utopia’, into the album, so we are all thinking of MY DYING BRIDE and not of some harsh American grinding doomy Hardcore album! “Holocene Extinction” is a great soundtrack for the downfall of man and the current world we are living in… raw, noisy, brutal, intense with a tad love for the English grinding Hardcore proto Death Metal madness of the late eighties, entangled with the crunchy Swedish guitar-crunch (and once in a while melody)! Enter the forgotten existence: www.facebook.com/terminalnation, www.20buckspin.com