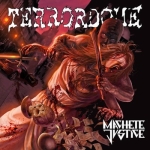 TERRORDOME is a Polish Crossover band that released stuff in a bunch of compilations and EPs and splits since they formed in 2005. This is their second album and it is pretty much what one might expect. They play well, have a brutal and speedy sound, and a lot of humour; beginning with the cover artwork, in which you have the classical representation of justice (similar to the statue in METALLICA’s last album that didn’t suck) about to go through a nasty time in the hands of a machete-wielding maniac. Or at the very end of the album, in a semi-hidden part of ‘Welcome To The Bangbus’, including an EXODUS ‘Brain Dead’ – like chorus. With short songs adding up to little more than half an hour, it is an intense album, often frantic. I particularly appreciate the busy drumming, which is very good (but they are all proficient). They totally render homage to the old classical Crossover sound of bands like D.R.I. and S.O.D. and they do it quite well (they even have a song called ‘Back To The ’80s’ in which they claim "this is what you want to hear!" so their target audience is pretty explicit). The best of these modern bands, however, such as POSSUÍDO PELO CÃO and MUNICIPAL WASTE, always have something of a modern touch to my ears when compared to the true bands of old. Perhaps this is a good thing. Anyway, this is a fine album if you’re into this kind of thing. It’s fast and relentless and fierce – listen to tracks such as ‘Evil Monk’ or ‘Nocturnal Emission’. For more information check out www.terrordome.net.pl, www.facebook.com/terrordomeband, www.defensemerch.com