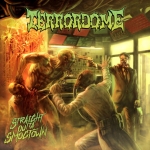 When I first checked into this album, I was pretty sure that TERRORDOME is a band from Brazil. This angry bastard of Thrash Metal and old fashioned Crossover reminded me of Brazil’s own RATOS DE PORÃO in an instant. And this is more than a compliment, since I was absolutely blown away by the pure energy of these songs. A song like ‘Desordem E Regresso’ (a pun on the motto of Brazil, Ordem E Progresso), that even has some lines sung in Portugese, just strengthened my assumption. Guess how surprised I was when I found out that TERRORDOME are from Kraków in Poland! “Straight Outta Smogtown” is already their third full length and their first one for Selfmadegod Records. And right now, I’m celebrating this album excessively! Just because I haven’t heard such a stark raving and deeply pissed off album in ages. The short acoustic intro ‘Terrorizing The Nation As The Best Way To Thwart Shameful Schemes’ is just an overture to the the first furiously raging Thrasher ‘Possessed By Blyat’ (by the way: Blyat is not another demon but the Russian word for shit). And even though TERRORDOME slow down every now and then (‘Worried Again’, e.g.), it’s overdrive and energy that are the driving forces of this album. It makes songs like ‘Desordem E Regresso’ (with guest vocals from the Brazilians Manu Joker, formerly SARCÓFAGO, and Jairo of CHAOS SYNOPSIS), the extremely pissed ‘Your Personal Comfort Versus The Global Disaster’ or ‘Ego-Boost Downfall’ a real joy. So if you’re into some good old-fashioned blasting Thrash with a huge Hardcore and Crossover vibe, late 1980s style, check out “Straight Outta Smogtown”. You won’t be disappointed by the rage of TERRORDOME! Visit them at www.facebook.com/terrordomeband, or their label at www.selfmadegod.com