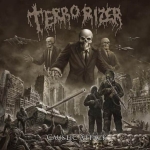 "Caustic Attack" is the fourth full length album by the legendary Death / Grind band TERRORIZER. It was released in late 2018 by the New York based label The End Records and it’s a terrific masterpiece. The extreme Metal scene just needed an album like this one. Yes, I could finish off this review here. Everyone knows TERRORIZER and their debut album "World Downfal", largely and rightly considered as one of the greatest extreme Metal titles of all time (both in terms of Death Metal and Grindcore). If "Caustic Attack" doesn’t reach the levels of "World Downfall" in terms of historic importance, it’s for sure the second best effort in the history of TERRORIZER and their most professional recording in terms of sound quality and production. Well, forget the plastic and artificial drum sound, as well as the uninspired riffs of its predecessors "Darkest Days Ahead" and "Hordes Of The Zombies", because "Caustic Attack" is one of the best albums released in 2018 and it’s so much better than the majority of the Grindcore bands currently active. Here we have an all-star power trio with the drumming legend Pete "The Feet" Commando Sandoval and two new members coming from MONSTROSITY: Lee Harrison (guitars) and Sam Molina (bass and vocals). Almost 44 minutes for 14 songs of top quality grinding Death Metal, the way it should be played. Both Lee and Sam offer to the listener a great performance: a solid bass sound, catchy, sharp and brutal riffs with some killer melodies. The Hardcore / Crust vibe is not very present, in favour of a more prominent Floridian Death Metal sound. So, if you’re into a more Punk / Crust oriented sound, the last NAUSEA album "Condemned To The System" is for sure a better choice; but if you’re looking for a brutal example of old school grinding Death Metal, "Caustic Attack" is a mandatory addition to your collection. The Floridian influence is very present with tons of riffs clearly in the vein of MONSTROSITY, MALEVOLENT CREATION and early MORBID ANGEL (for example the song ‘Crisis’ has a riff pretty reminiscent of ‘Rapture’). So, imagine a grinding version of MORBID ANGEL or "Harmony Corruption" by NAPALM DEATH and "Horrified" by REPULSION on steroids. A special reference needs to be made to the role of Pete, that at 50 is still the godfather of blastbeats and one of the fastest drummers ever. He offers us his full drumming toolkit: ultra fast double bass and rollings, single foot blastbeats, bomb blasts, d-beats, triplets, great tempo changes and cymbal accents. There are also some killer blastbeats enriched with a furious double bass, like in ‘Trench Of Corruption’, and this time he chose a fantastic and natural sound from the drum triggering module. If you’re fascinated for extreme Metal drumming, "Caustic Attack" is a sort of audio tutorial that demostrates Pete’s creative way to approach the instrument. Last but not least, an extra point goes to the cover artwork: an astonishing post-apocalyptic drawing. There’s nothing more to say: buy this album! www.facebook.com/terrorizerofficial, www.theendrecords.com