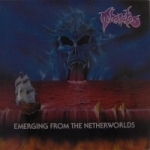 Now there’s a cause for celebration! As part of their Death Certificate campaign Century Media signed a deal with THANATOS to re-release their first two albums and here’s what we have on the first one which originally came out in 1990 on Shark Records (long dead by now). New layouts, liner notes, lyrics plus 4 bonus tracks from their 1989 demo "Omnicoitor" and the whole thing is given enormous boost of heavyness, brutality and quality by killer remastered sound courtesy of Dan Swanö. And it sounds brilliant! In case half of your brain cells died and you can’t remember or you traded your old CDs for booze and drugs, then let me do a short recap – THANATOS deliver a punishingly intense and technical mix of Death / Thrash Metal mostly influenced by SLAYER, HOLY MOSES, DARK ANGEL, DEATH and POSSESSED and back in 1990 they really stood out from the crowd. Let me assure you, in 22 years since then, not many bands came close to copying this, so it’s very obvious that in 2012 "Emerging From The Netherworlds" sounds fuckin fresh and ripping! It’s one of those albums where remastering brought out the whole new dimension and quality that has been lacking on the original release. It opens an extra layer of their musicianship and soundwisely brings the album up to date. All instruments are brought upfront and laid down widely, so in the end you get much bigger and heavier sounding album. I really dig manic vocals by Stephan Gebedy, he sounds like a psychotic hydrid between Chuck Shuldiner and Jeff Becerra with strong own accentuation, you have to hear those rabid vocal tirades accompanied by fast paced, catchy slicing riffs and quite extensive soloing, that’s where they show Thrash Metal of the highest calibre! Besides the 11 album tracks, there’s also a real treat in form of the "Omnicoitor" demo, showing the brutal beginings of THANATOS. Anyways, to round this up nicely and to the point, you can bet your money on this THANATOS debut with an earlift, it sounds brutal as gutted rhinocero and the actual songs stood the test of time as aggressive Death / Thrash classics! I’m very curious to see if this will lit the fire under them and make the release a new album much sooner than later!! Meanwhile, as we used to say – BUY OR DIE! NOW! www.thanatos.info, www.facebook.com/thanatos333, www.centurymedia.com