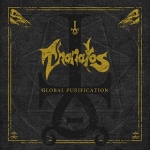 Mr. Stephan Gebédi is not one of those musicians who only plays in one band. Everyone knows that he’s playing the guitar in the mighty HAIL OF BULLETS as well as he has still his own band THANATOS running. This is the band where he is the leader, the guitar player, the composer, the singer… As this year sees the 30th anniversary of the band, it is not only time to have the re-release series of all their previous stuff completed, but also a new album has to see the light of day, the first for their new company Century Media who also did the re-releases. So, here we are! “Global Purification” is only the sixth album in the long history of the band that’s full of line-up changes and even a seven year break. But with a quite stable line-up, the band recorded three albums in the last ten years. So it should be no wonder that this one is a pretty tight album, performed by very good musicians as well. But will THANATOS keep the high standard the predecessor “Justified Genocide” has set? Sadly not, even though “Global Purification” is far from being average. It’s just not as compelling… Well, the opening title track is a pretty nice orgy of Death and Thrash with a leadfoot, but the real highlights of this album are to follow soon. ‘The Murder Of Innocence’ already convinces with some melodic breaks, ‘Infestation Of The Soul’ starts creeping, before it turns into a massacre. But the creeping groove returns. Somehow this one even has some hit qualities. In the end, ‘Nothing Left’ comes along with a doomy part full of melodic guitars, just to introduce the ‘World Jihad’, a damn fast overkill. My personal fave on “Global Purification” is ‘The Demonized Minority’ with its almost epic intro piece, introducing a faster outbreak. ‘Blood Will Be Spilled’ has some smasher qualities for the live shows again, and the final ‘Bastion Of Blasphemy’ really is a final musical bloodbath, a declaration of war to finish the album. If there weren’t those two really unspectacular songs, ‘Feeding The War Machine’ and ‘Queen Of Gore’, we could speak of a damn fine album. But maybe it’s just me who passed those two completely by… Fans of THANATOS in special and fine extreme Metal, somewhere at the edge of Death and Thrash, in general won’t do wrong checking out “Global Purification”. For those who love limited editions: the enhanced digipak will feature a bonus track that can’t be found on the CD and vinyl versions. It will be a well done re-recorded version of ‘Dawn Of The Dead’, the original opener of the band’s debut album “Emerging From The Netherworlds”. In the end, I’ll leave you with some links to check out: www.thanatos.info, www.facebook.com/pages/thanatos/150901861608686 and www.centurymedia.com