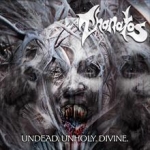 The Dutch Metal institution THANATOS is known to be the first extreme Metal band to emerge from the Netherlands. They already started in 1984, released no less than five demo tapes and an official live tape before their first full length album "Emerging From The Netherworlds" came out in 1990 on the infamous Shark label. After one more album for that label ("Realm Of Ecstasy"), they split-up in 1992. Their break lasted for seven years until main man, singer and guitar player Stephan Gebédi (also of HAIL OF BULLETS fame) reformed the band with a completely new and very prominently outfitted line-up. Since their new lease of life, they recorded three more albums and two EPs for five (!) different companies. But now their nomadism seems to have come to an end, since Century Media are in charge now for THANATOS. The first thing to follow this collaboration is a proper re-release of all the albums they released to date. Following the first two albums, which were still based in extreme Thrash Metal, in 2012 and the comeback album "Angelic Encounters" a year after, now their last two albums are available again. Since the first three re-releases came along with some nice and worthy bonus stuff, the other two THANATOS albums will also feature some extras. First we have the 2004 album "Undead. Unholy. Divine.", that already had to do without the rhythm section Aad Kloosterwaard (SINISTER, among others) and Theo Van Eekelen (HAIL OF BULLETS and more). Instead, the band presented its recent incarnation with Marco De Bruin (bass) and Yuri Rinkel (drums) for the first time, fighting alongside the guitar duo Stephan Gebédi and Paul Baayens (ASPHYX and HAIL OF BULLETS). Musically, THANATOS returned to their Thrash Metal roots a little more in comparison to the predecessor "Angelic Encounters", which was very (or even too much) much based in overproduced Death Metal that was typical for the turn of the millennium. The drums finally sound natural again, with decent triggering instead of this hardly bearable drum sound on "Angelic Encounters". Guitars and bass just kill, creating a very dense and sick atmosphere. But this density isn’t charged to the debit of variety. The opening ‘Lambs To The Slaughter’ breathes the feeling of the old days of extreme Metal, while the title track has some early SEPULTURA vibes. My fave ‘Eraser’ even comes along with some classic Metal ingredients – just listen to those high pitched screams very unusual for Stephan Gebédi. With ‘Devour The Living’ and the title track we also find two songs from the "Beyond Terror" EP (2002), that are more on the Death Metal side. To sum it up, "Undead. Unholy. Divine." is a fine offering for all aficionados of extreme Metal, no doubt. The bonus for this new edition are the two songs THANATOS recorded for a 7" EP that came out on Singaporean Konqueror Records in 2006. These were not completely new, since ‘The Burning Of Sodom’ is a DARK ANGEL cover tune that no one really needs since you can’t beat the original. The THANATOS version gets not even near the original brutality (I heavily disagree here… I haven’t heard a DARK ANGEL cover as convincing as this one! Especially since Stephan often comes pretty close to Don Doty’s amazing vocal delivery! – Frank). ‘And Jesus Wept’ is a re-recorded version of the opener of their second album "Realm Of Ecstasy", more recent in production and a little more Death Metallic in the spirit. Well, these songs were already included on the original CD edition of "Justified Genocide" in 2009, but fit a little better here, not just for chronological reasons. Find out more at: www.thanatos.info, www.facebook.com/pages/thanatos/150901861608686 or www.centurymedia.com

Geeeeee – I really am honoured indeed to review this Dutch outfit. Just think about it, guys – these sickos have been around for twenty years now. They performed with the likes of KREATOR, NAPALM DEATH, MESSIAH, BOLT THROWER, SEPULTURA, DEATH and so on. That is quite an achievement I would say. The band has gone through times of changes and disappointments – that is why THANATOS ceased to create music in 1992. At the end of 1999 the re-united with a completely new line-up and headed towards new shores musically, always remembering their origins. It can be stated that they really have released some killer outputs like "Emerging From The Netherworlds", "Angelic Encounters" and "Realm Of Ecstasy". Now after all these heroic deeds in the past it is time again for THANATOS to unleash utter old school mania upon us shivering lot. "Undead. Unholy. Divine." sounds awesome. Great raw production, old school riffing reminding me (which is definitely intended by the guys) of the good old times of acts like SEPULTURA, old MORBID ANGEL, old IMMOLATION, definitely old DEATH, ASPHYX etc. Thus a combination of Thrash and Death elements. My favourites are ‘Eraser’ (killer Heavy Metal screams integrated – hilarious!!!) and ‘Servants Of Hatred’. But still – Stephan and Co. weave in some mordern elements as well such as blast-beats, fast double bass attacks and so on. The vocals really constitute their own identity and are highly reckognizable… like, oh well, in the good old times, harharhar. Definitely a cool record old school maniacs should call their own – but newbis shouldn’t hesitate either purchasing the jewel because this sort of proves old qualities. Tata… Label contact: www.black-lotus-recs.com